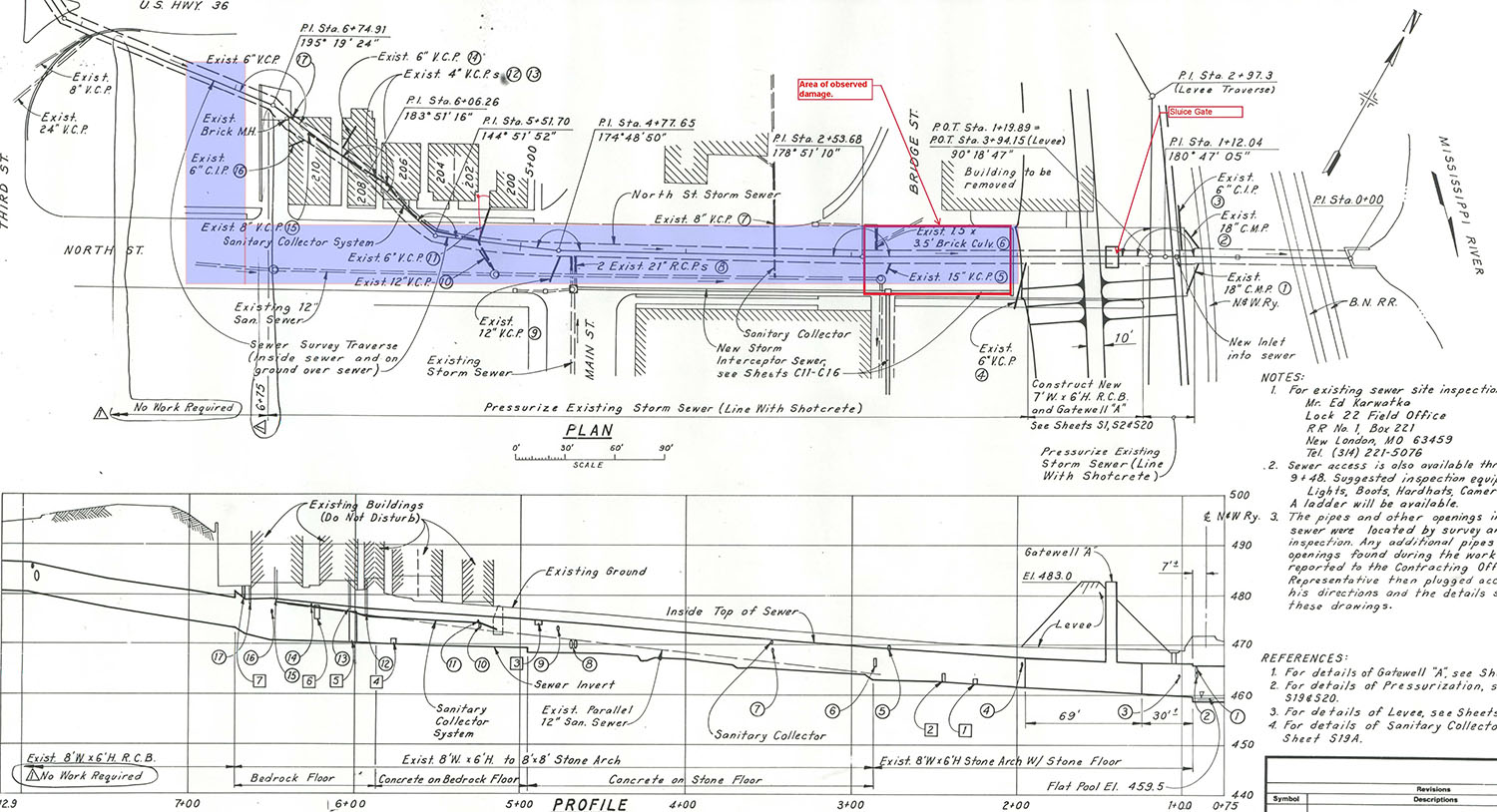 Client: Hannibal Board of Public Works

At the request of the Hannibal Board of Public Works PSBA completed the following:

Hannibal’s North Street storm sewer drains a total area of 251 acres directly into the Mississippi
River during periods of normal river flow. The existing stone archway that runs the length of North Street
was modified in the early 1990’s to include a sluice gate beneath the levee that can be closed when the Mississippi reaches high levels, thus restrict the Mississippi from backing up into the storm sewer. All stormwater from North Street is now directed to the new pump station located to the Southeast.

The volume of water generated during a I 00-year rainfall event is approximately 1.3 million cubic feet (or approximately 9. 7 million gallons). The existing stormwater pipe/archway provides approximately 30,000 cubic feet of storage. Based on these preliminary estimates, it is apparent the existing system does not provide adequate storage for even a 2-year rainfall event. Nor does it provide sufficient relief in the form of a properly sized emergency overflow or pump station to alleviate the massive pressures created when full. These generalizations seem to support the hypothesis that the pressures created caused the stone archway to lift and separate at the floor, allowing large amounts of water to flow into and destroy the subgrade and roadway above.

The recommended option is to replace the existing stone archway from the levee to Mark Twain Ave.
with a box culvert capable of withstanding applied pressures. This option closely mimics the existing condition, while repairing the known deficiencies, it does not address the effects of backing water up further upstream in the system. There are other stresses to this system. To reduce these stresses, we recommend the system described above be fitted with, at a minimum, 2 – 24″ pumps which will be capable of pumping stormwater stored below the elevation of the relief structure during extended closure periods of the sluice gate. The 2-24″ pumps will be able to keep up with drainage from rain events with an intensity less than ¾”/hour which makes up most rain events. By mirroring the 3-24″ pumps in the existing lift station near Lyon Street, operational efficiencies can be obtained between the two lift stations.